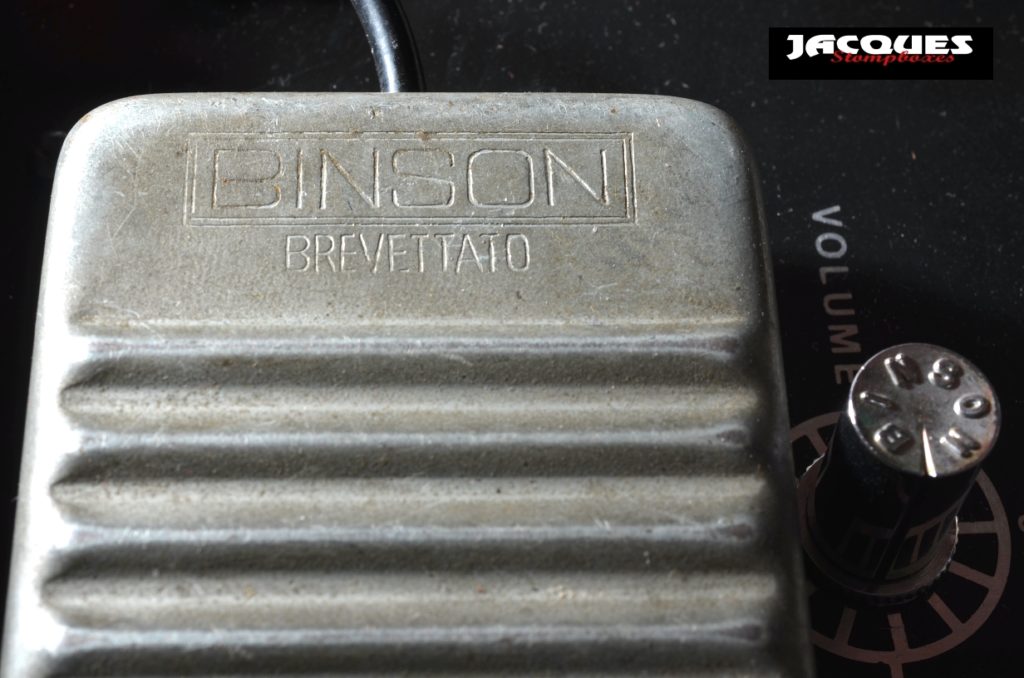 In these times of digital technology and computer based effects, tape echoes nevertheless remain musicians’ favorite delays , just after their old competitors , the analog delays.
This is quite weird, as no effect wanted digital so badly: as you need to play back a signal one or many times with a given delays , nothing should work better than computers. 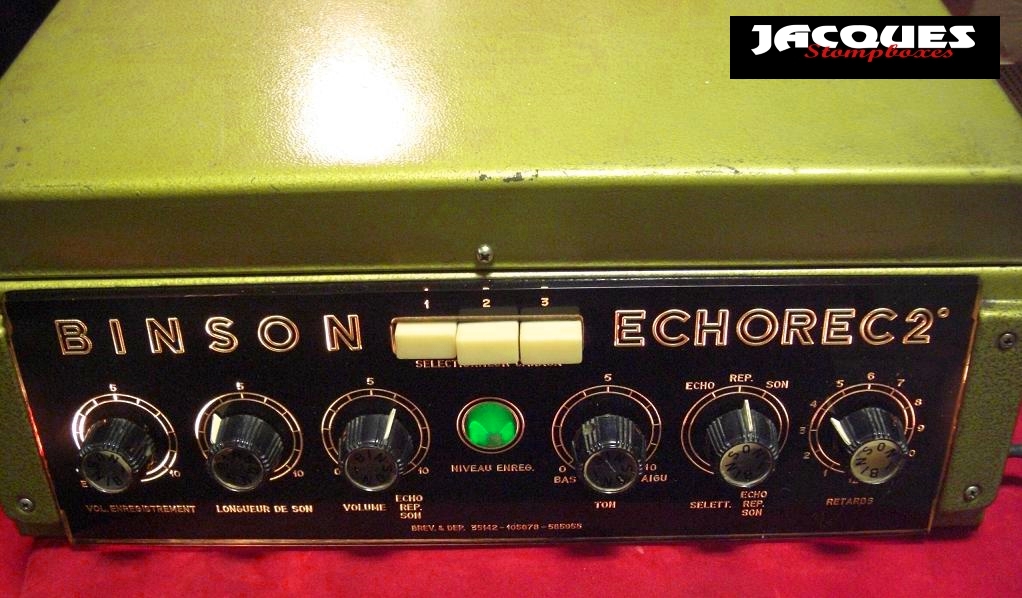 Why such an obsolete, stuttering , noisy, unreliable tape recorder is preferred by serious musicians to ultra precise 24bit ( or even 32bit ) sampling?
When everyone and his sister will go for a harsher/trebly theory, I would rather invite you to watch any movie where Ray Harryhausen performed special effects. While made with prehistoric do-it-yourself technique, these various monsters will always seem more real than computerized equivalent.
You know why? Because when you use weird ways of creating them, monsters look weird. And monster must be weird.
I don’t want my dinosaurs to move like milk cows! I want them to move in a weird pixilated way.
And echo is a special effect. Echo MUST sounds weird to be real. After all , in mother nature, you need a big mountain to create it.
And when we talk about weird, the least we can say is that our Italian friends from binson got ahead. 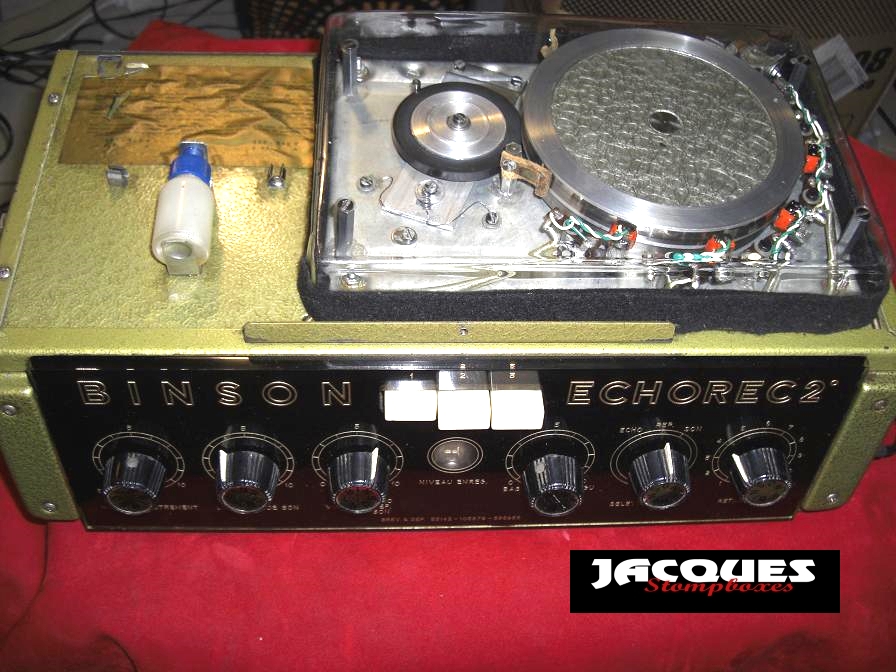 Why a simple tape when a direct drive magnetic rotating disc with heads all around can be such fun !

And why using dull jack plugs like everyone when Geloso non-standard bizarre 3 prongs plugs are available only in Italy and for a short time in History?

And why black or chrome, when medicine greenish yellow look so nicely strange?

And why anonymous silk screen when we could look different with plexi non-smoking railway station signs with our logo ? 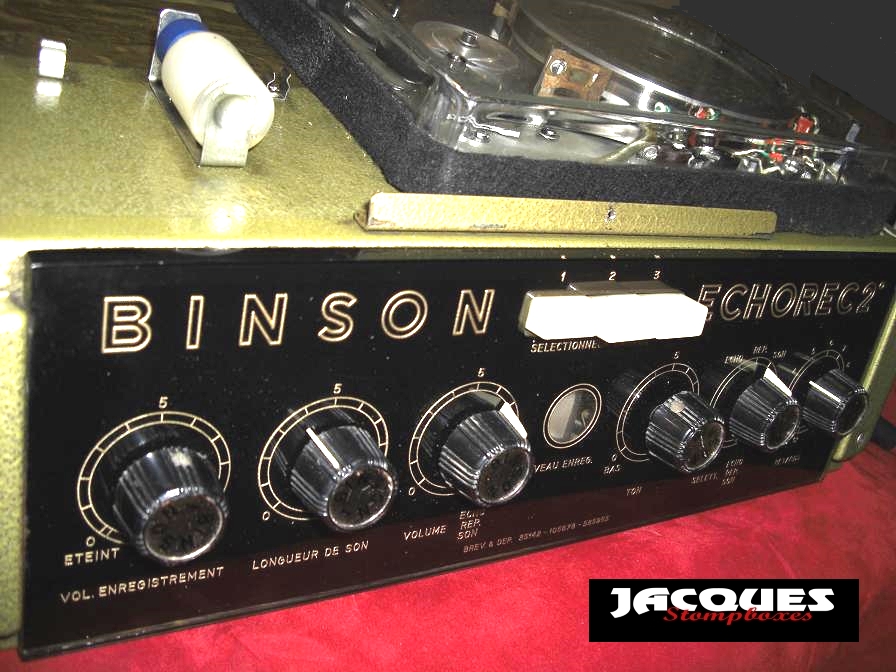 But, but, even with all this, binson echorecs were a hit because, because their delay tone is RayHarryhauseneskly tremendous!
The main reasons why are:

1- The use of these disc allows to put heads all around it, thus permitting to catch and play back delay in places where no tape recorder can do it. This gave this primitive machinery to create a beautiful sort of reverb, one of the only alternative to spring reverb at this time.

2- These Binson engineers were no beginners at amplifying and create for their monster one of the most complicated all-tube preamp I have ever encountered. Most of the tube were German E83CC double triode , maybe the best 12AX7 tube equivalent ever made.

3- The disc was coated with magnetic substance that was supposed to last ( well maybe not to be still used to day, some 45 years after) and thus react differently from the usual tapes loops to the guitar frequency range.

Pink Floyd , then enjoying a climax in inspiration and taste, made this echo unit their main effect for guitars, bass and organ. For a complete demonstration, buy “Pink Floyd at Pompei” and spot the yellow echorecs all along the movie. It is worth noting that this movie was a French TV production, at a time when money was not important in our cultural landscape, the 2 TV channels then belonging to the republic. It was coinciding with my teen-age too, and believe me it was a wonderful era for rock music. 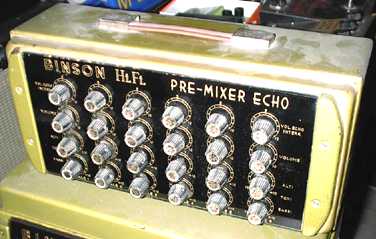 Anyway, these echoes were not intended to be used as a guitar or instrument effect, but as part as a PA system. Their were sold with their mixer to go then into a power amp for a nice 50w or something all tube PA.
I bought this system from a band of my area, which bought it new in the sixties, and while the PA use of Binson stuff is now obsolete, it somehow interesting to see this surviving all tube mixer. 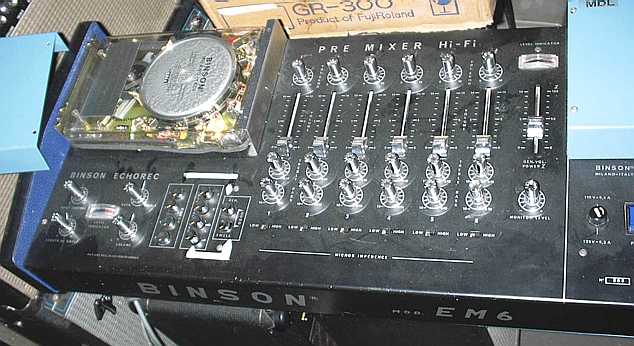 This is a newer solid state system, with this time all-in-one mixer+echo. Fortunately, while they wised up about all the former weirdnesses, they kept the disc system, making this mixer a guenuine useful (but pretty large) echorec. 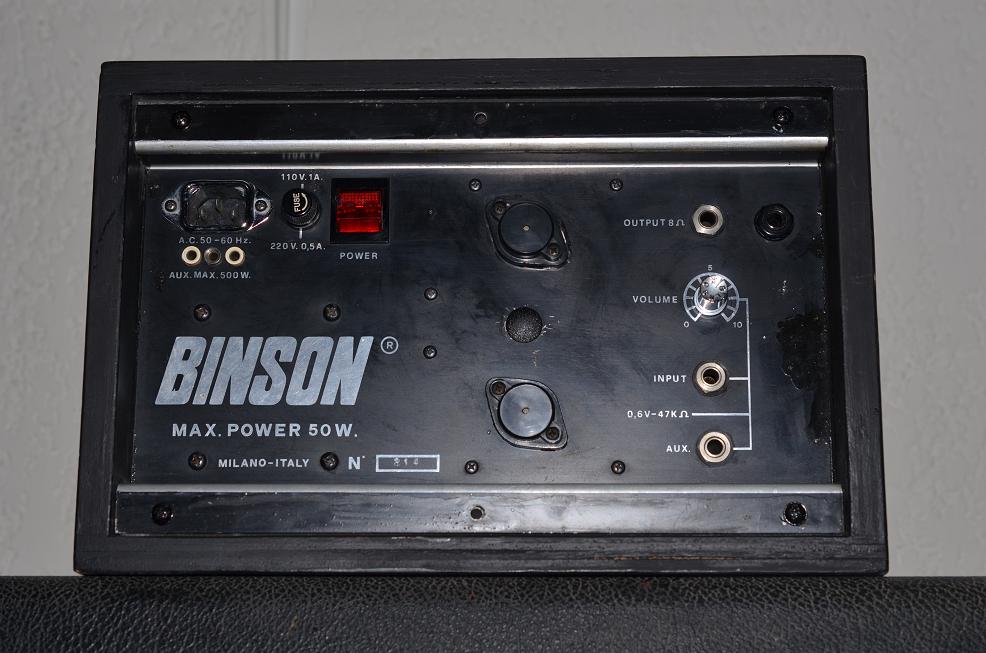 Here we have a Binson power amp to go with the modern mixer. They had the matching speakers but I did not bother buying them. What I would really love to find is Binson guitar amps, which I know had a very good reputation, but were kind of rare.